Kiyoshi Ōkubo (大久保 清), also referred to in the media as "Wantanabe Kyoshi," was a serial killer from Japan who raped more than a dozen Japanese women and slaughtered eight from late March, 1971 until mid-May of the same year. An outcast, hungry for power and enraged by authority, found "vengeance" in preying on young women ages 16-21. He was noted for approaching and often harassing nearly 150 different women in just 3 months, victimizing those who were persuaded by his charm or simply out of helps reach.

Kiyoshi struggled to fit in as a child. His mother loved him very dearly, and was unwilling to enforce any discipline. His personality was a target for bullies throughout his childhood and as a teen, which caused him to spend most of his time alone. He did not participate in extracurricular activities and didn’t apply himself to school. He often chose to go by a pen name, Tanigawa Ivan (谷川伊凡).

It was noted that Kiyoshi was “unusually mature” for his age by his teachers. He was scolded often for arguing back with elders and making rude remarks to his female classmates. When he was just 11, he was caught molesting his 7-year-old female neighbor. His family, lacking the discipline they needed to show, joking called him “little Kodaira” (Kodaira was a former rape-murdering Japanese serial killer).

Being bullied and alone, Okubo felt like his life wasn’t in his control. His lack of confidence, demented mind, and power lust caused him to want to rape women. On December 26, 1955, he decided it was finally time. Okubo, being undoubtedly nervous and completely unprepared, attempted (and failed) to rape an unsuspecting woman. He was arrested, convicted and incarcerated for almost a year. He was paroled in December, 1959.

Four months later in the April of 1960, he again attempted (and failed) to rape another woman. Strangely, however, his victim withdrew her charges against him.

For the time being, Okubo’s failed rape attempts were enough to keep him honest. On May 5, 1961, he married a woman and had a son and a daughter.

His marriage was not a commitment to him, as his hunger for dominance grew. On December 23, 1966, two days before Christmas, he raped a young girl. His success only made his urges grow and two months later, he raped another woman. Four months later, he was again apprehended and sent to prison for 4 years. He was released in 1971.

Soon after his released from prison, Okubo decided that rape just wasn’t enough to subside his evil urges and rage against the authorities. He was quoted as saying “"I became the brute that I am because of the police. During their investigation of the previous two cases in which I was involved, they treated me very badly. Their punishment was dealt out in a way that completely destroyed my humanity. It made me rebel against authority." He began to lure women, rape them, and then murder them.

Okubo’s terror ended fast due to his own negligence. He often did not care to clean up evidence or switch vehicles after some women managed to get away. Okubo showed no particular method when disposing the bodies of the women he had slain. Four were were buried in a vacant lot near Takasaki City, the others were throw in rural dump sites. His Mazda was continually seen around the Takasaki neighborhood, which told police that it was most likely him. When he was caught, he was in his Mazda with a young women. Calmly, Okubo reached into his pocket, pulled out some money and gave it to the women and said “You’d better take a taxi home.”

At first he was only held on charges of abduction with intent to commit an immoral act, but Okubo soon confessed his crimes and led police to the graves of several victims they had not yet discovered.

The court found Okubo guilty and sentenced to death by hanging on February 22, 1973. He spent the next three years working to appeal his trial, all attempts failed. When asked if he had any comments before death, he stated: 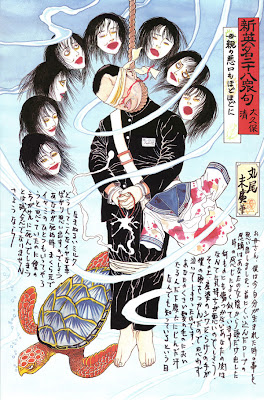 “If I could be reborn I would like to come back as a weed. I was told by a women once I once knew that no matter how much weeds are tread upon, they snap back. That’s the kind of existence I would like to have in the next life.”


When his date for death had finally arrived, Okubo knew that this was it. Filled with emotions of hate, shame, and hopefully remorse, it was noted that he couldn’t stand without assistance. He was hanged 1976, soon after becoming 41.

In the Media Today

Welcome to the fastest growing crime database on the internet! Here you can expect to find countless articles and essays detailing serial killers, heinous crime, and crazy criminals!